Bookselling Ireland Cookbook of the Year 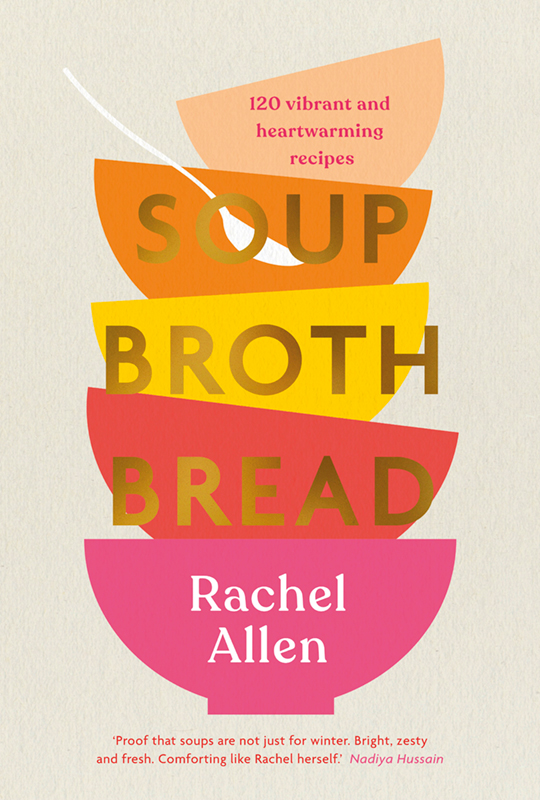 Recipes to warm the heart and restore the soul

A bowl of soup can do so many things. A cosy, comforting meal on a cold, dark winter’s day. A gentle broth to heal and soothe. A fresh, vibrant celebration of spring produce, or a simple and nourishing way to use up leftovers. For feeding many mouths, for lunch in a hurry, for a dinner-party starter, or for filling the freezer: no matter your need, there’s a soup to solve it.

In Soup Broth Bread, acclaimed chef and cookery writer Rachel Allen gathers together every recipe for soup you could ever want. She also shares an array of wonderful homemade breads to serve alongside, as well as easy and delicious garnishes, drizzles, salsas, croutons and crumbs to add the perfect finishing touch. This definitive book will bring bowlfuls of joy to your kitchen for many years to come.

Rachel Allen is a bestselling cookery writer, teacher and TV chef based at the world-famous Ballymaloe Cookery School in County Cork, Ireland.

Her 14 hugely successful cookbooks have sold over a million copies worldwide, and she has written for numerous magazines and newspapers including the Irish Mail on Sunday, the Sunday Tribune, Delicious, Olive, BBC Good Food, and her ongoing weekly food column for the Irish Sunday Independent. Rachel currently hosts RTE’s The Restaurant with Marco Pierre White, and her TV series for the BBC and RTE (which include Rachel’s Favourite Food, Bake, Easy Meals, Cake and Rachel’s Everyday Kitchen) have been broadcast in over 30 different countries. She has also been a guest on multiple international programmes, including NBC’s Today.

Rachel lives in a beautiful home overlooking the sea in Shanagarry, near Ballymaloe in County Cork, with her husband, Isaac, and their three children.